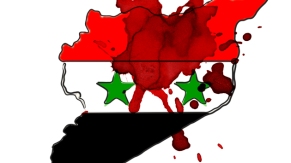 US says “Assad must go,” increases aid to the opposition.. Social imperialists agree

At the recent so-called “Friends of Syria Conference,” US and other foreign powers decided to increase their support for the Syrian opposition. “Assad must go,” said Hillary Clinton:

“Secretary of State Hillary Rodham Clinton said that, despite a newly-brokered cease fire agreement with Syrian President Bashar al Assad, his days as president are numbered as his forces continue the bloody clash with Syrian opposition groups.

“We think Assad must go,” Clinton told ABC today after attending the one-day Friends of the Syrian People conference in Istanbul. “The sooner the better for everyone concerned.”
But she added that the process must be multi-pronged.

The UN-Arab League peace plan and cease fire negotiated last week by envoy Kofi Annan is a good beginning, she said, but Assad has yet to stop the violence.

“There has to be a timeline,” Clinton said regarding the diplomatic process. “It can’t go on indefinitely.”

Representatives of more than 60 countries attending the conference pledged financial assistance to the Syrian Free Army, the main opposition group, in an effort to encourage further defections from Assad’s forces.

Clinton said the United States has agreed to pledge an additional $12 million for a total of $25 million in aid and to provide communications equipment to help the Syrian Free Army organize.
She met with the Syrian National Congress today to discuss how to document evidence of the atrocities for future investigations or trials in international criminal courts. A sanctions working group was also created to target those who are helping Assad.

While some Arab countries have urged western nations to arm Syrian rebels, Clinton said the United States is trying to balance its support of opposition groups without raising expectations that can’t be met.

“We do have a stake in what happens in Syria, we just have to be thoughtful about how we pursue our role,” she told ABC…”

Echoing Clinton, many in the so-called “left” are supporting the imperialist attack against the Syrian people:

“In recent weeks, Egypt’s misnamed Revolutionary Socialists (RS) have stepped up their campaign in support of imperialist war plans against Syria. Since the beginning of March, the RS have published a series of articles denouncing the regime of Syrian president Bashar Al-Assad and criticising the imperialist powers for not launching a military intervention against Syria.

The RS are further attacking China for being complicit in killings in Syria. According to media reports, student members of the RS expelled a representative of the Chinese embassy from a seminar at the University in Alexandria on March 10. They attacked the Chinese representative for his country’s support for the Syrian regime, holding up banners reading: “Your country endorses the killing of our Syrian brothers”. A picture of the incident has since then been prominently placed on the RS’s web site.

China along with Russia vetoed a United Nations Security Council resolution last month that was meant to prepare a Western-backed intervention against Syria.

The principal responsibility for the bloodshed in Syria lies with the US and its allies, not with the Assad regime. By calling for foreign intervention in Syria, the RS are exposing themselves as tools of imperialism, willing to endorse the type of imperialist intervention that devastated Libya, causing 50,000 deaths and installing a far-right Islamist regime in Tripoli…”

“Opposing social revolution at home, they support imperialist aggression abroad. In propaganda articles, they uncritically present Western-backed armed groups as “revolutionaries” and in some cases criticise the imperialist powers for being too hesitant to launch wars of aggression, while uncritically presenting unverified accounts of civilian casualties due to Syrian government intervention.

The RS recently published a piece by Yusef Khalil and the ISO’s Lee Sustar titled “Will Syria’s regime crush the revolution?” The article was first published in English on the ISO’s web site on March 5 and a few days later in Arabic on the RS web site. This article falsifies the events in Syria, gets caught in its own contradictions, and ultimately critiques imperialism from the right, for not being aggressive enough in launching war with Syria…”

“It regards its campaign against Syria as part of a general strategy of confrontation with Iran to control the oil-rich and strategically vital Middle East. This strategy is ultimately bound up with broader plans in Washington to maintain the US’s global hegemony, and in particular to use US military strength to combat the increasing economic influence of China. Manifestly, the RS support these measures…”